GRAD RECRUITMENT IS IN FULL SWING

With the peak graduate recruitment season now upon us, students and employers alike are bracing themselves for an intense few months. Traditionally, the months of February through to April is when recruitment season is at its most robust as employers are on the hunt for the country’s top graduates.

According to Australia’s Financial Review (AFR), there is good news for graduates as they look to enter the job market. Following the global financial crisis (GFC) in 2008, Australia’s graduate job market is starting to make noteworthy improvements for the first time in 10 years.

Official 2016 data released by the AFR states; “70.9% of the students who completed undergraduate courses in 2015 had found full-time jobs within four months, up from 68.8% a year earlier.”

Interestingly, the lowest point in full-time graduate employment happened in 2014 when the employment rate fell to a rock bottom 68.1%. A steep decline from the 85.2% high reached in 2008, before the GFC hit.

As the global economy makes positive and steady strides, so does the graduate recruitment industry and we at GradConnection are excited for what 2017 has to offer.

Although traffic to our site flows all year round, there is an obvious spike during peak recruitment months.

Below is a look at our traffic from last year over the months of February to April, compared to the same months in 2015. 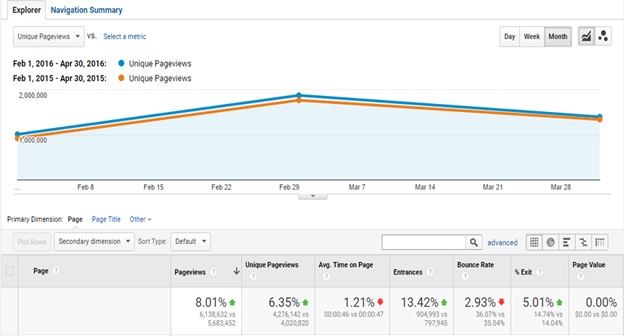 Over this busy time period last year, we had an 8% increase in traffic compared to the year before. In March 2016 we hit the highest unique pageviews we’ve ever had, with over 100 000 more views than in 2015, falling just short of 2 million unique pageviews over the month.

As usual, we are expecting our traffic to continue to grow and reach new highs this year. 2017 has already got off to a very busy start, including the launch of our new GC5 site, and we look forward to sharing new and interesting stats with you as the year unfolds.